Sports provide a movie genre primed for teaching some of life’s most important lessons. Whether it is overcoming adversity and beating the odds, to breaking down racial and cultural barriers or sticking together and standing up for what you believe in. We’ve put together our list of the 40 best sports movies for the kids.

THE SANDLOT (1993) PG: Considered by many as the greatest kids movie ever. A classic film the whole family will like about the challenge and adventures of a young boy who moves into a new neighborhood and is trying to fit in by playing baseball with the other kids. Lots of laughs and life lessons about determination, drive and friendship.

HOOSIERS (1986) PG: Many call this the best sports movie ever made.  Must watch film about and underdog coach and a team that defy the odds and go to the Indiana State finals. Staring Gene Hackman, Barbara Hershey and Dennis Hopper.

FIELD OF DREAMS (1989) PG: Classic baseball movie starring Kevin Costner as an Iowa farmer who builds a baseball field in his cornfield that is visited by the ghost of baseball’s past. Great movie that also teaches some baseball history.

THE NATURAL (1984) PG: Arguably one of the best baseball movies ever made.  Nominated for four Academy Awards.  Staring Robert Redford. A beautifully shot movie that tells the story of success and failure though the game of baseball.  One note. Make sure you have enough time for this one. It is long, running 2 hours and 18 minutes.

HEAVEN CAN WAIT (1978) PG: One of my all time favorites. Old school movie. Warren Beatty becomes Quarterback Joe Pendleton of the L.A. Rams after he acciedntally gets taken to heaven too soon by an over eager angel.

MIRACLE (2004) PG : this movie is a good history lessons on one the greatest moments in sports history, “the miracle on ice”. The true story of the 1980 Winter Olympics when the United States beat the Soviet Union in Hockey. Stars Kurt Russell.

KICKING & SCREAMING (2005) PG: Will Ferrell is hilarious in this comedy that has become a classic in our home. Former Bear’s coach Mike Ditka helps Ferrell coach a rag tag soccer team against his over achieving Dad. Fun for all members of the family. Teaches the important life lesson that winning isn’t everything.

MILLION DOLLAR ARM (2014) PG: A self absorbed sports agent goes to India hoping to transform Indian cricket players into Major league baseball pitchers.  A great story about what it’s like to be different. Also give the kids a little bit of an education on Indian culture.

McFARLAND, USA (2015) PG: Big budget Disney film based on the true story of Jim White, a down on his luck coach played by Kevin Costner, who lands a job in the poor and predominately latino city of McFarland, CA. Costner turns an unlikely group of high school  boys into one of the best cross country teams.  A heartwarming and inspirational  story about never giving up, sticking together and overcoming the odds.

THE ROOKIE (2002)  G A big budget Disney Movie based on the true inspirational story of Jimmy Morris(Dennis Quaid) about a baseball coach who overcomes the odds to make his almost impossible dream of pitching in the big leagues come true.

INVINCIBLE (2006) PG: The story of a bartender and substitute teacher in Philadelphia who despite never having played football goes to the Eagles open try outs and makes the team.

SOUL SURFER (2011) PG: A true story based on the life of Bethany Hamilton. A successful teenage surfer who loses an arm in a shark attack and refuses to quit the sport she loves.

A LEAGUE OF THEIR OWN (1992) PG: Geena Davis, Tom Hanks and Rosie O’Donnell star in this Dramedy about an all female baseball league formed during World War II.

AIR BUD (1997) PG: A young man struggling with the death of his Dad finds reprieve in his pet dog, Bud. Bud is a stray who turns the kid’s life around when he joins the school’s basketball team.

THE EXPRESS (2008) PG: The story of the first african-american, Syracuse’s Ernie Davis, to win the Heisman Trophy. An inspirational film packed with football.

SEARCHING FOR BOBBY FISHER (1993) PG: The story of  a young chess prodigy. Starring, Laurence Fishburne and Ben Kingsley. Bobby is forced to deal with the stress and pressures of being one of the top chess players in the world, but he refuses to adapt the same approach as real life legend Bobby Fisher.

KARATE KID (1984)PG: We love the original one staring Ralph Macchio. The classic tale of the underdog overcoming adversity. A young boy is taught Karate to defend himself from bullies by an unlikely mentor, Mr. Miyagi.

THE MIGHTY DUCKS (1992) PG: A self absorbed Lawyer has to coach a rag tag youth hockey team as his community service. Starring Emilio Estevez.

ROOKIE OF THE YEAR (1993) PG: A young boy’s dream of playing in the major leagues comes true after shoulder surgery causes his tendons to heal so tightly he can pitch 103 mph. 12-year-old Henry becomes the youngest player to ever play in the big leagues.

LITTLE GIANTS (1994) PG: A young girl who doesn’t make the town’s top pee wee football team forms her own team made up of outcasts. The bad news bears of pee wee football. A sweet movie for both boys and girls about believing in yourself.

REMEMBER THE TITANS (2000) PG: This Disney classic stars Denzel Washington a football coach of a football team during the forced desegregation of a Virginia high school in the early 1970’s.

ROCKY (1976) PG: Sylvester Stallone stars in one of the best known sports films of all time about a small-time boxer from working-class Philadelphia. Rocky Balboa is chosen to take on the reigning world heavyweight champion.

SPACE JAM (1996) PG: Michael Jordan plays basketball with bugs bunny, Daffy Duck and the rest of the looney toons. Kind of a silly, mindless movie that will entertain the kids.

THE BIG GREEN (1995) PG: A group of misfit kids in a small town in Texas are coached soccer by a teacher from England.

SECRETARIAT (2010) PG : Long before their was American Pharaoh, their was Secretariat, still arguably the best race horse ever. Based on the true story of the 1973 triple crown winner and the family who owned him.

WE ARE MARSHALL (2006) PG: Warner Brothers movie starring Matthew McConaughey as the football coach tasked with rebuilding a team tragically decimated after it’s players are killed in a plane crash. Based on the true life events.

ANGELS IN THE OUTFIELD (1994) PG: Disney movie staring Danny Glover and Tony Danza star in this a young boys prayers are answered by 2 angels that come out of the sky and not only lead a baseball team to wins, but a life lesson about hope and courage and loyalty.

COOL RUNNINGS (1993) PG: Fun movie about a group of Jamaican bobsledders who dream of competing in the Winter Olympics, even though they have never seen snow. John Candy stars as the former disgraced champion tasked with coaching them. Loosely based on a true story.

FOR THE OLDER KIDS

HOOP DREAMS (1984) PG-13 : basketball documentery was largely financed by PBS. It’s the real life story of two young basketball players trying to make it out of their poor chicago neighborhood.

SEA BISCUIT (2003) PG-13: An unlikely horse becomes a champion and a symbol of hope for Americans during the great depression.

BEND IT LIKE BECKHAM (2002) PG-13 : A coming of life story about an Indian Girl playing soccer in England even though her family doesn’t approve.

42 (2013) PG-13: The story of sports icon Jackie Robinson who broke baseball’s color barriers as the first African American to play professional baseball. An inspirational story that all American’s should know.  One note, the N-word is used throughout the film to authentically represent how Robinson was spoken to. For me it was an opportunity to discuss with my children the history of the word and what it represents today.

FRIDAY NIGHT LIGHTS (2004) PG-13: The story of a football-obsessed small town in Texas.  Struggles, challenges and life lesson unfold through a story about football.  The film handles subjects like alcoholism, accepting your parents, dealing with failure and taking charge of your own destiny.

UNDEFEATED (2011) PG-13: Academy Award winner for best documentary feature. Tells the story of the struggles of a high school football team in Memphis trying to win after many losing seasons. The film earned high critical acclaim by many.

THE BLIND SIDE (2009) PG-13: Semi-biographical film about NFL Player Michael Oher and his impoverished upbringing and his adoption. Sandra Bullock won the Academy Award for Best Actress for her portrayal of the woman who took Oher in and helped him become a first round draft pick in the NFL. A feel good movie.

COACH CARTER (2005) PG-13: We should all watch this one as a reminder that school is more important than sports. Based on a true story of a basketball coach played by Samuel L. Jackson who shuts down his teams championship season when their grades slip.

INVICTUS (2009) PG-13: A film about how sports can bring people together.  The amazing real life story of how Nelson Mandela joined with the captain of South Africa’s rugby team to help unite a country with deep racial wounds.

THE ENDLESS SUMMER (1966): For our So. Cal kids.  The most epic and legendary surf film ever. The documentary about 2 friends searching the world including surf spots in Hawaii, Australia and South Africa for “The Perfect Wave.” In 2002 the film was selected for preservation in the United States National Film Registry by the Library of Congress as being “culturally, historically, or aesthetically significant”. 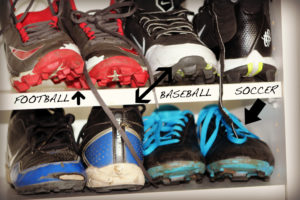 All Cleats are NOT the same. The Differences Between Soccer, Baseball, Football and Lacrosse Cleats